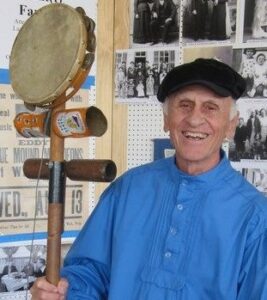 The Luxembourg American Cultural Society wishes to express our heartfelt condolences to the friends and family of Lloyd “Gilly” Croatt, a founding member and the first president of the LACS. Below is an excerpt from his obituary, which can be read in full here: Lloyd “Gilly” Croatt Obituary

“After 89 years of laughter, love, and life, Lloyd “Gilly” Croatt passed away peacefully in his sleep on July 31, 2022. Lloyd, the youngest of five children, was born in the front room of the family home in Belgium, Wisconsin to Alfred Nicholas and Anna Schmit Croatt…

…A lover of all things Luxembourgish, Lloyd returned to his native land eleven times, hosting tour groups there multiple times. In his later years he proudly established Luxembourg citizenship. He was a native speaker of Luxembourgoise, an unwritten language not changed since the 1850’s when his ancestors came to America, and he starred in a Luxembourgish produced documentary about the lost language of the country. He had no word for anything invented from the 1850’s onwards: cars, computers, even the radio!

Lloyd was a founding member of the Luxembourg American Cultural Society, becoming its first president, and ushered in the building of the Luxembourg American Cultural Center in his hometown of Belgium, Wisconsin (confusing, we know!). It was his most proud accomplishment. He loved nothing more than kibitzing with Luxembourgers, and their American descendants, checking for any familial connections, of which quite often there were…

…A Celebration of Life will be held this late fall/early winter in New Smyrna Beach, Florida at Our Lady Star of the Sea parish. A second Celebration and burial will be held in Belgium, Wisconsin in August of next year during the weekend of Luxembourg Fest. In lieu of flowers, memorials are appreciated to the Luxembourg American Cultural Society Endowment Fund, P.O. Box 157, Belgium, WI 53004. For more information on Gilly Croatt’s illustrious life, please email Michael Croatt at michael@mp2productions.com.”

Hear Lloyd tell stories in the Voices From the Village historic audio tour, accessible from anywhere! For the tour, click here: www.lacs.lu/voices-from-the-village

Visit the LACS Donate webpage to make a donation in memory of Lloyd: www.lacs.lu/donate