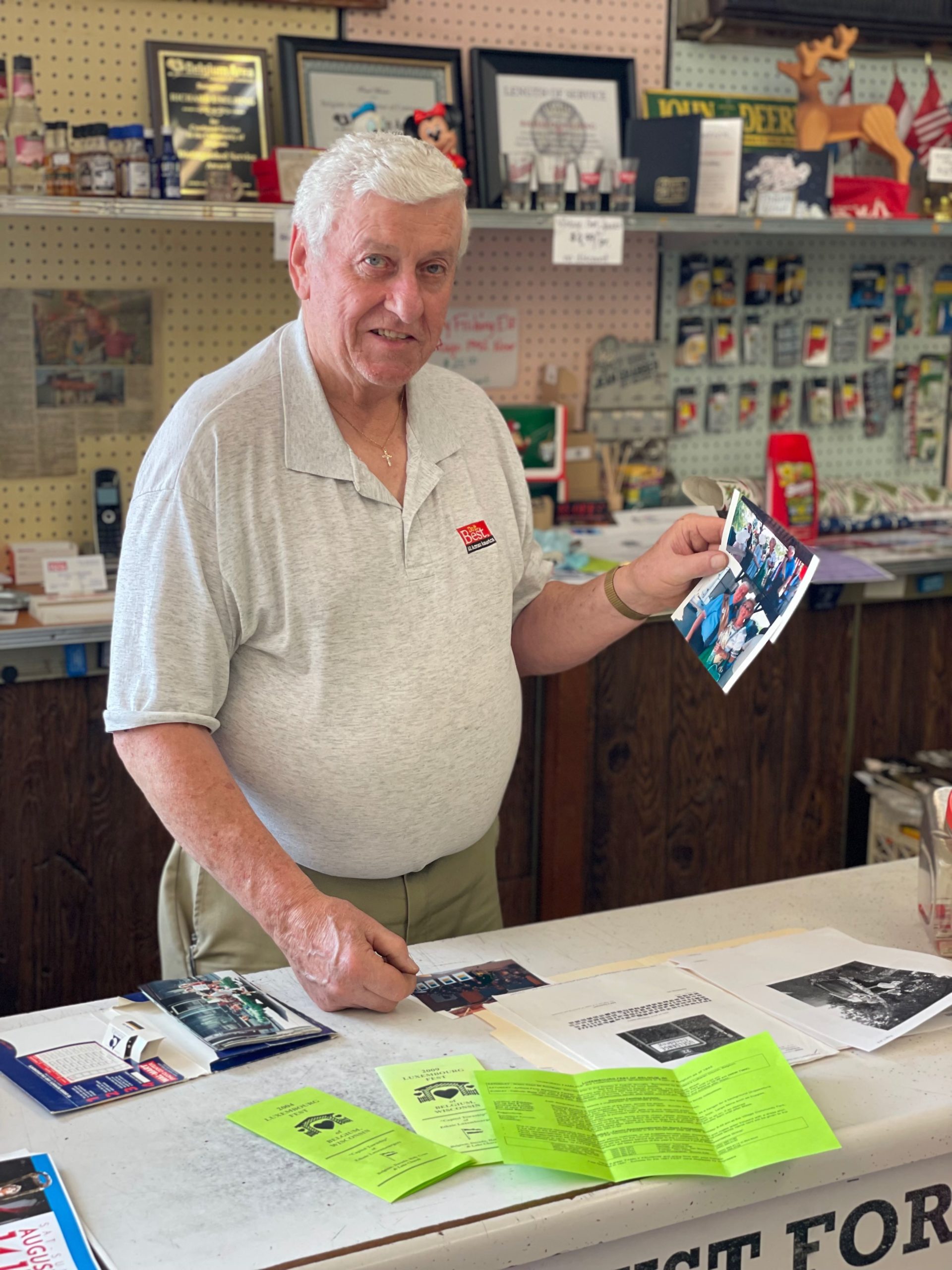 BELGIUM, WISCONSIN, JULY 26, 2021.  —Luxembourg Fest of America, located in Belgium, Wisconsin, turns 35 this August 14-15, and the milestone has those who have contributed to its success taking a walk down Memory Lane.  Richard Uselding, owner of Belgium Hardware, was on the planning committee for the very first Luxembourg Fest.  He recalled it first being dubbed, “Luxembourg Fest of Belgium,” and consisted of an antique tractor parade on Saturday followed by a Catholic Mass on Sunday.  The initial committee was a small but passionate group of locals with an interest in preserving Belgium’s Luxembourgish heritage.

“Bea Krier was very inspirational with ideas and came up with the idea that we should have a Luxembourg Fest.  Credit should go to her,” Uselding says.  “As we became more enthused for it, it just kept growing.”  He added that it is now known as Luxembourg Fest of America as the Festival culture is now shared and enjoyed by visitors from around the nation, and even bringing in, in a typical year, many visitors from Luxembourg.

As Luxembourg is the only Grand Duchy in the world, meaning a state ruled by a Grand Duke or Duchess, the initial committee found it appropriate to begin naming a Fest Duke and Duchess. The first Duke and Duchess were Emil and Martha Ries.  This tradition continues today- this year’s Duke and Duchess, Pat and Rhonda Krier, will be crowned during Fest Pageantries Sunday, August 15th following mass.

Music and mass have always been a large part of Luxembourg Fest. The mass was originally a collaborative effort of parishes in three local communities: Holy Cross, Lake Church, and Dacada, and the Catholic churches would take turns providing the music for mass.

Denise Dimmer’s first memory of Luxembourg Fest was “playing piano for them when St. Nicholas Church (in Dacada) was in charge.”  Dimmer was swept into the excitement of Fest and still serves on the Luxembourg Fest planning committee today.

Since the beginning, a band would play after mass as guests danced the afternoon away. For the last 15 years, the country of Luxembourg has sent over a Luxembourgish band to play at Fest.  The group coming with the band from Luxembourg would number from 10-30 people who would all be hosted by local families, creating relationships that often spanned a lifetime.

Uselding recalls hosting fellow Useldings from Luxembourg, whom he had never met before.  He and his wife later traveled to Luxembourg where the Luxembourgish Useldings hosted them for two weeks, yet refused to take a penny in payment.

Fred Krier, who is a Belgium, Wisconsin resident and a Luxembourg dual citizen, also hosted members of this group.  He fondly recalls his friendship with Luxembourger Roger Biever, a former police officer who traveled to Luxembourg Fest with his son and stayed with the Kriers six times. The Kriers would take the pair all over to show them the sights.

“They knew how to party,” he laughs.

“One night after eating at No-Nos, they brought in instruments and moved tables and people started dancing.  We left at 2 am. I don’t know when they came in.”

When Krier later called Biever for help in booking a hotel and car for an upcoming trip to Luxembourg, he responded “no, no, no- you stay with us.”  Similar to Uselding’s experience, Biever generously hosted the Kriers on two trips to Luxembourg, even taking them on an excursion to Paris.

The visiting Luxembourgers were overjoyed to see that the Belgium, Wisconsin descendants often learned Luxembourgish from their parents and grandparents, and were amused to find the vocabulary they were learning was dated, as language evolves so quickly.

Uselding recalls, “They were just so proud that we were maintaining our roots of our Luxembourgish heritage.”

After 35 years, Luxembourg Fest is still going strong.  In 2011, the newly formed Luxembourg American Cultural Society took on a larger role in the planning of Luxembourg Fest, as the relationship between Luxembourg and the small village of Belgium, Wisconsin, continued to strengthen.  This year’s Luxembourg Fest fun includes live music all Saturday by Devon DeLux (a Chicago band made up of Luxembourgish descendants), Nitro Five, and headlining act, Star Six Nine.  There is also a 10 am parade, the World’s Largest Treipen-Eating Contest, Division BMX Bike Shows, Luxembourg Street Market, Jolly Good Kids Zone featuring straw bales, balloon animals, kids’ crafts, and shows by magician/illusionist Glen Gerard; Ansay International’s Taste of Luxembourg tent, a caricature artist, lots to eat and drink, and much more! On Sunday, in staying with tradition, Luxembourg Fest hosts a polka mass and fest pageantry at 10 am with music by the Goodtime Dutchmen providing the dance music until 1 pm.

“Not being a Luxembourger, I was really pleased that they decided to honor their heritage, she said.  “When you look at the population of Belgium at that point, for them to do something like this was really amazing.”

Uselding summarizes with Luxembourg Fest’s secret to its success over the past 35 years: “It’s the pride of the community.  It helps maintain relationships, heritage and culture. People enjoy it.”

Luxembourg Fest details and schedules are available at www.lacs.lu.