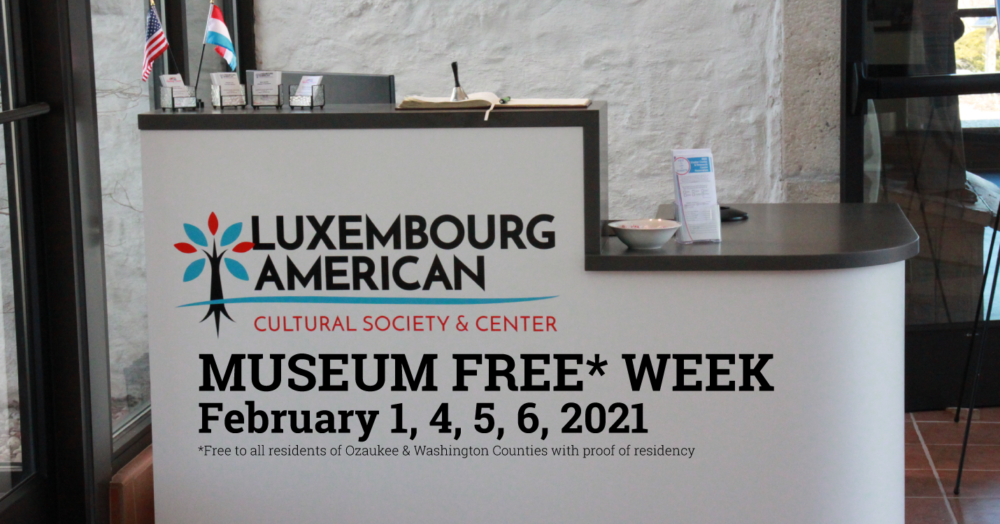 BELGIUM, WISCONSIN, JANUARY 15, 2021.  The Luxembourg American Cultural Society will be hosting a Free Museum Week the first week of February 2021 for all residents of Ozaukee and Washington Counties.

The center’s unique Roots & Leaves museum tells the tale of Luxembourg, the world’s only Grand Duchy, past and present. Guests will learn about Luxembourg immigration to America as well as the impact Luxembourg immigrants and their descendants have had and continue to make on life in America.

The museum is housed in the Mamer-Hansen Luxembourgian stone barn originally built in 1872 by Luxembourg immigrant Jacob Mamer. The barn was carefully dismantled and moved from its original location in the Town of Port Washington in 2005, then rebuilt to house the museum at 100 Peter Thein Avenue in Belgium.  The museum officially opened in 2009.

Its exhibit panels, display cases, furnishings and artwork were all gifts from the people of Luxembourg through the country’s ministry of Culture and were crafted by Luxembourgish artisans.

ABOUT THE LUXEMBOURG AMERICAN CULTURAL SOCIETY:

The Luxembourg American Cultural Society’s mission is to preserve the roots of our heritage and nurture the leaves of ongoing relationships between Luxembourg and America.  Its membership includes thousands from several countries around the world. In a typical year, the LACS hosts multiple tours to Luxembourg, presents educational programs and events such as its annual Cultural Conference and Luxembourg Fest, publishes the Luxembourg American Gazette, and is the only cultural institute trusted under the high patronage of the Grand Duke to assist with dual citizenship.

The LACS is based at the Luxembourg American Cultural Center in Belgium, Wisconsin, which also houses the Roots & Leaves Museum, Dooley-Wagner Research Center- the largest research center for Luxembourg studies and genealogy outside of the Grand Duchy, and a Luxembourg gift shop.