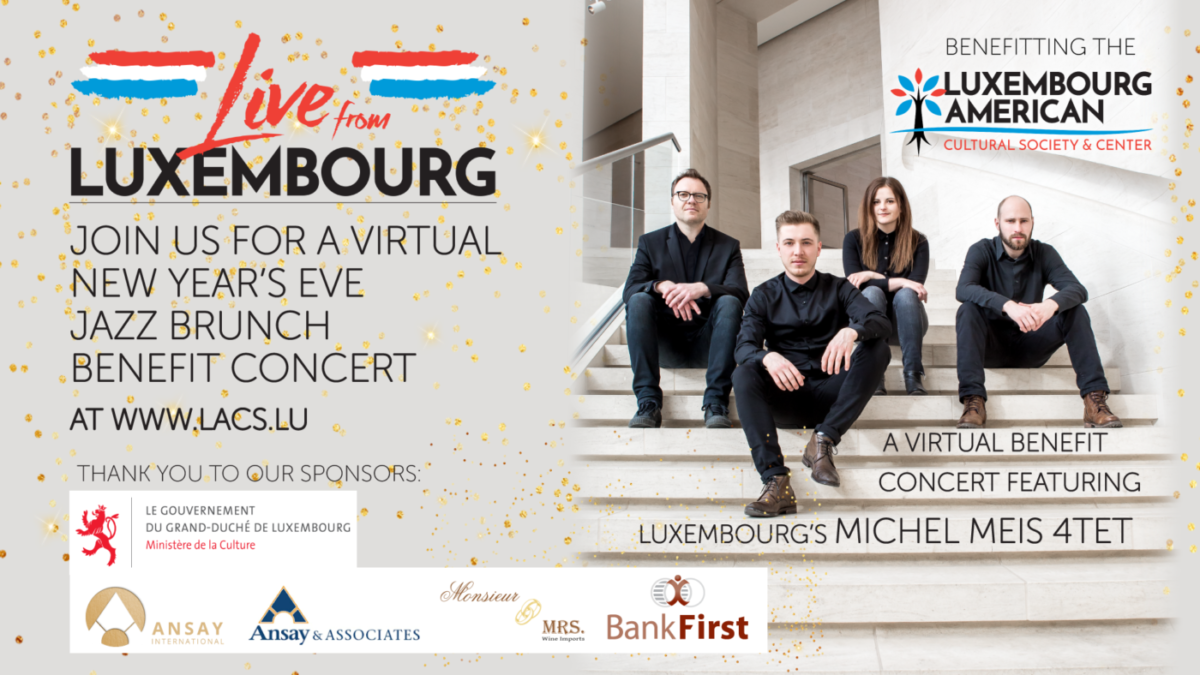 BELGIUM, WISCONSIN, DECEMBER 1, 2020.  — While 2020 is a year most people can’t wait to put behind them, the Luxembourg American Cultural Society is offering a way to end it on a high note when it presents “Live from Luxembourg- Virtual Jazz Brunch with Luxembourg’s Michel Meis 4tet” Thursday, December 31st, at 11:00 am, CST.

The concert will premiere on www.lacs.lu and on the LACS’s YouTube channel.  While there is no charge to view the show, as a benefit event for the LACS nonprofit organization, freewill donations are gratefully accepted.  Donations can be made online at www.lacs.lu or mailed in to Luxembourg American Cultural Society, P.O. Box 157, Belgium, Wisconsin 53004.

Viewers are encouraged to create a relaxing brunch setting as they watch the concert- the LACS will be introducing several Luxembourgish brunch recipes on its website and social media accounts in advance that people can prepare at home to eat as they enjoy the show.

This is the second “Live from Luxembourg” show in this new virtual concert series, the first having premiered this year on Luxembourg’s National Day featuring Luxembourg band Zero Point Five. The first concert brought in viewers from around the globe to celebrate National Day “together” while still being thousands of miles apart.

This concert features up and coming Luxembourg Jazz ensemble, the Michel Meis 4tet. Led by drummer and composer Michel Meis, the quartet is making its mark on the European jazz scene with a sonic vocabulary that skillfully blends a traditional instrumentation with the fresh approach and the broad musical background of open-minded and fearless musicians. They effortlessly move from one extreme to the other. Unleashed rhythms culminate in lyrical melodies. Classical jazz elements steer towards lush electronic effects. Free improvisation ends up almost seamlessly in sophisticated, detailed compositions.

“To me, being torn between different options doesn’t mean being undecided, but rather passionately breaking down apparent barriers or bringing opposites in a dialogue” says Meis about his music.

The result is an exciting modern jazz that has been duly recognized by Double Moon/Challenge Records when they signed the quartet’s debut album “Lost in Translation” in their series “Jazz thing Next Generation” – a first for a Luxembourgish artist.

ABOUT THE LUXEMBOURG AMERICAN CULTURAL SOCIETY:

The Luxembourg American Cultural Society’s mission is to preserve the roots of our heritage and nurture the leaves of ongoing relationships between Luxembourg and America.  It boasts a membership of more than 3000 from several countries around the world. In a typical year, the LACS hosts multiple tours to Luxembourg, presents educational programs and events such as its annual Cultural Conference and Luxembourg Fest, publishes the Luxembourg American Gazette, and is the only cultural institute trusted under the high patronage of the Grand Duke to assist with dual citizenship.

The LACS is based at the Luxembourg American Cultural Center in Belgium, Wisconsin, which also houses the Roots & Leaves Museum, Dooley-Wagner Research Center- the largest research center for Luxembourg studies and genealogy outside of the Grand Duchy, and a Luxembourg gift shop.