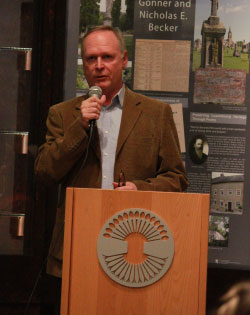 CLICK HERE for an interview of Stan Myck, Consular from the Luxembourg Embassy in Washington, D.C. In November, 2019, Consul Myck traveled to Belgium, Wisconsin as an envoy from the Embassy to speak at the Luxembourg American Cultural Center in honor of the 75th Anniversary of the Battle of the Bulge, the legendary WWII Battle which took place from December 16, 1944- January 25, 1945.

Consular Myck is also visited the Luxembourg American Cultural Society, Luxembourg-built sites, and connected with area Luxembourgers and Luxembourg descendants, as the LACS boasts more than 3,000 members, many of which settled in the Belgium, Wisconsin area and throughout the Midwest.

This interview took place during that visit and aired on radio station WUWM during the “Lake Effect” show with Bonnie North.